Located at the northern limit of the Coral Triangle, Taiwanese reefs are among the most diverse marine ecosystems on earth, hosting over a third of the world's scleractinian diversity (558 species) and over 1,484 reef fish species. The environmental conditions alongside the steep topography surrounding Taiwan offer contrasted situations for coral communities & their associated organisms to develop & thrive. In the Northern parts of the country, subtropical marginal coral communities are present, sometimes well developed & occasionally bearing similitudes with Japanese coral ecosystems. While the southern parts of the country, including offshore islands such as Ludao (綠島), Lanyu (蘭嶼), or the more remote Dongsha (東沙) & Taiping (太平) Atolls present well developed & highly diverse reefs.

The extraordinary biodiversity hosted by Taiwanese reefs along with the coastal protection & recreational activities offered by this ecosystem constitutes a critical economical resource to the Taiwanese economy, with an estimated average value of 514,417 US$/km2/year. However, the multiple anthropogenic pressures along with the highly active typhoon regime & recurrent heat stresses have induced major degradations of the Taiwanese reefs, making them one of the five most threatened reef regions in South-East Asia. 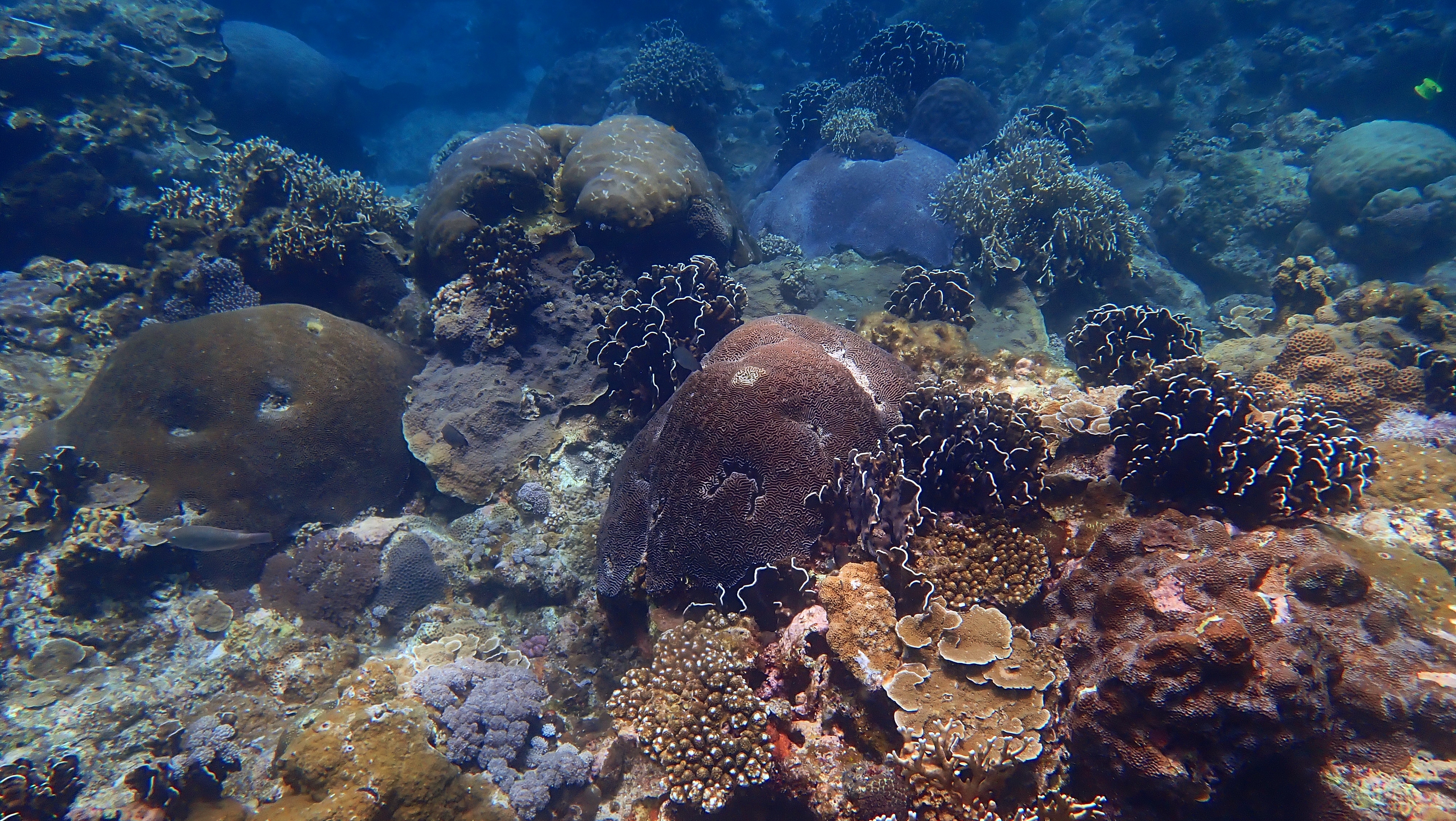 Since 2012, I was involved in & led several field surveys in Taiwan. Navigate through the map below to discover the surveyed sites of the different projects. Zoom in (especially in the South of Taiwan as many survey markers there overlap) & click on site circles to obtain more information about them.

Over the recent decades, extreme events such as typhoons & bleaching events have increased in intensity & frequency, threatening coral reef ecosystems' survival. In 1998, a strong El Niño event triggered the first global mass-bleaching event & decimated about 16% of all coral reefs on Earth. The formation of a strong El-Niño event in 2015-2016 has alerted the scientific community about the risk of an even more widespread & devastating mass-bleaching event than the one of 1998. At the planetary scale, the 2015-2016 El-Niño event did lead to the most extensive & severe mass-bleaching event ever recorded. Globally, scientific reports have estimated that 75% of the reefs worldwide showed signs of bleaching during this period. Yet, the bleaching intensity was variable from region to region.

 Bleaching in Outlet, KNP (09/2016, 5 m deep) 
In this context, from 2015 to 2017, I studied the impacts of heat stress & typhoon events on Kenting National Park's (KNP) reefs (Ribas-Deulofeu et al. 2021a). Between August 2015 & April 2017, seven typhoons hit Taiwan (including two super-typhoons), while in situ seawater temperature in KNP reached a maximum of 31.2°C, as opposed to an average maximum SST of 28.8°C (2007-2016). In Taiwan, the successive storms repeatedly lowered the levels of thermal stress during the 2015–2016 El Niño event. The maximum Degree Heating Weeklocal (DHW) recorded in KNP only reached 3.1°C weeks (DHWregion (NOAA) = 9.85°C weeks) before the super-typhoon Meranti hit Kenting in September 2016 & reduced the heat stress in the region. Additionnal storms & typhoons further helped cool seawaters & limited the impacts of this El Niño event on KNP's coral assemblages. Indeed, during the 2016 hot season, only an average of 2.2% of KNP benthic communities have bleached.

 Example of typhoon Meranti breakage in KNP (09/2016, 5 m deep) On the other hand, despite the overall coral cover in KNP remaining stable between 2015-2017, local shifts were observed in the benthic composition, which could be related to mechanical damage caused by storm disturbances. In the long-term, the highly active typhoon regime in the region could lead to a shift toward a higher contribution of mechanical damage-resistant corals in KNP, further decreasing the structural complexity of its reefs (Ribas-Deulofeu et al. 2021a).

In the last three years (2020-2022), almost no typhoon has directly hit Taiwan which led to important heat stress anomalies & recent mass-bleaching events, especially in the southern regions of the country. With the recent local lack of typhoons, Taiwan's coral ecosystems are facing worsening pressures from global warming as they no longer benefit from repeated heat stress reliefs that were previously provided by successive typhoons during the hot season.

Pressure measurements for rugosity assessment (Ribas-Deulofeu et al. 2021b)
Structural complexity is an important feature to understand reef resilience abilities, through its role in mediating predator-prey interactions, regulating competition & promoting recruitment. During my Ph.D. degree, I proposed to adapt the root mean square of the deviation (Rq) from high-resolution surface profiles with polynomials to quantify the relative contributions of fine & coarse rugosities into the overall rugosity of coral reefs (Ribas-Deulofeu et al. 2021b). We compared our results with the chain method & the visual rugosity index commonly used to characterize reef structural complexity.

Our proposed Rq indices as rugosity estimators successfully accounted for overall rugosity, fine & coarse scale rugosity, respectively. Which traditional rugosity estimators failed to. Furthermore, relationships between Rq scores & specific functional groups in the benthic community were found, highliting drivers of given rugosity scales in our studied reefs. Estimating both coarse & fine scale rugosities —& not overall reef rugosity alone— is crucial to better understand the relationship between the structural complexity of reefs & their capacity to resist or recover after specific disturbances. Our indices can be used on any depth profiles, from satellite data to fine-scale 3D models. Our method could also play an important role in reef management by allowing managers to customize their strategies to targeted species or ecosystem functions (Ribas-Deulofeu et al. 2021b).
 Photogrammetry plot deployed in Ludao 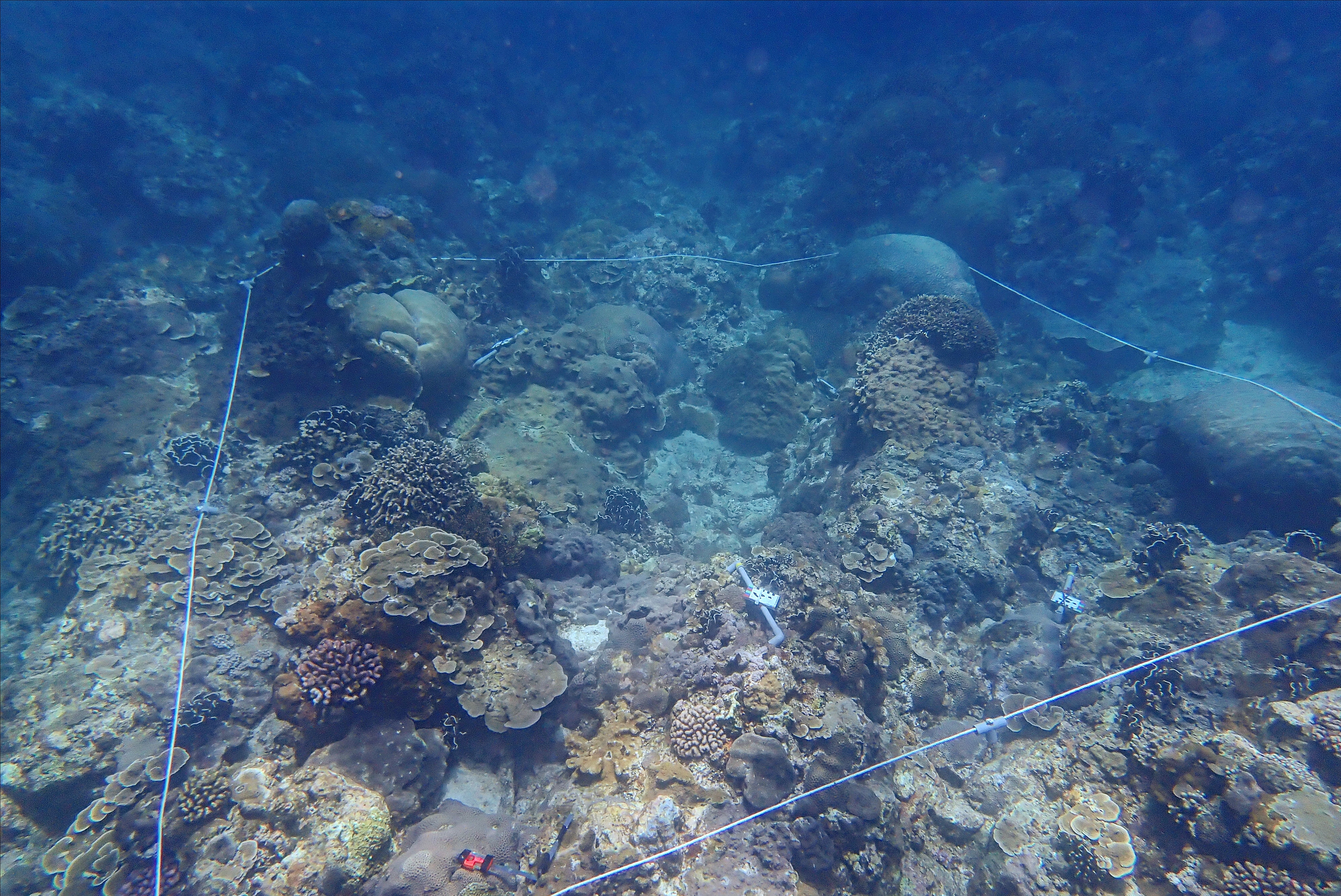 Transitioning from 2D to 3D reef complexity estimations:
Since 2022, I have been involved in field supervision of Master's students (FRElab IONTU, Taiwan) for the deployment of Structure from Motion (SfM) photogrammetry plots across the latitudinal gradient of Taiwan. Among our project's objectives, we aim toward the assessment of changes in benthic communities & trajectories of reef-building populations across the Kuroshio region (Denis et al. 2019). The photogrammetry team is excited by the coming up results & is looking forward to sharing further on them in the coming months.

With the rapid anthropogenic developments & the decline of coral cover within KNP over the last decades, it became crucial to identify parameters that can enhance its reefs’ resilience & fulfill sustainable development objectives. By combining knowledge on biotic & abiotic components of reef ecosystems with their socio-economical context, System Dynamics (SD) models are offering an adequate approach to decipher the complex processes ensuring reef resilience. In this project, we modelled the KNP reef ecosystems along with its adjacent watersheds. Our model recreated the interactions between 21 functional groups composing KNP reefs as well as the hydrological functioning of the area, covering in total 869.75km2 of land & ocean. Impacts of natural disturbances such as typhoon have also been integrated as well as the interactions between anthropogenic activities & the ecological processes in KNP. Ultimately, the ecosystem dynamics identified by the model & their relationships with anthropogenic disturbances were used to propose adequate sustainable management strategies to ensure the local persistence of the ecosystem along with its economical values.